According to close Family members, he was first admitted at Nakasero hospital in critical condition  weeks ago and has since been on life support

When his health deteriorated, he  was airlifted to Nairobi for further treatment.

General Tumwine has succumbed to cancer of the lungs

Tumwine served as Security Minister in the Cabinet of Uganda, from March 2018 to 2021.

Tumwine was born on 12 April 1954, in Burunga, Mbarara District.

He attended Burunga Primary School, Mbarara High School and St. Henry’s College Kitovu, before joining Makerere University, where in 1977, he graduated with the degree of Bachelor of Arts in Fine Art together with the Diploma in Education; abbreviated:BA (FA)/Dip. Ed. He specialised in the history of art painting.

He subsequently graduated from the Cadet Officers Course at the Tanzania Military Academy at Monduli.

He also attended the Senior Command Course at the Uganda Senior Command and Staff College at Kimaka, in Jinja, Uganda, being a member of the pioneer class that graduated in 2005.[5] Tumwine also holds further military qualifications from the military academy in Vystry, in the Soviet Union.
Military career

In 1978, he interrupted his teaching career to join the FRONASA forces led by Yoweri Museveni to fight the Idi Amin regime. In 1981, when Museveni went to the bush to form the National Resistance Army (NRA), Elly

In 1984, Tumwine was named Commander of the Army, a post he held until 1987, when he was succeeded by General Salim Saleh. Over the years, he served as Minister of State for Defence in 1989; Director General of the External Security Organization (ESO) from 1994 until 1996; Presidential Adviser from 1996 until 1998; and Chairman of the High Command Appeals Committee from 1986 until 1999.

He has also continuously represented the UPDF in the Ugandan Parliament since 1986.

In September 2005, he was promoted to the rank of general in the UPDF and named to chair the UPDF General Court Marshal

On Monday 16 May 2022, Tumwiine was among 34 generals who were retired from the UPDF.

UPDF launches air and artillery strikes against ADF IN... 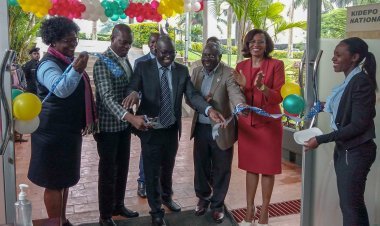