President Museveni applauded for his strategic management of Ebola and Covid-19 at the US-Africa Leaders’ Summit.

President Yoweri Museveni has been commended over his successful fight against the COVID-19 pandemic and the Ebola outbreak in Uganda at the on-going US-Africa Leaders’ Summit. President Museveni was lauded by his Botswana counterpart, H.E Mokgweetsi Masisi during the Partnering for Sustainable Health session held under the theme “Building Resilience for Healthy People, Healthy Countries” at the Washington Convention Center on Tuesday.

In his address, President Museveni underscored the role of Ugandan scientists during the outbreak of the COVID-19 saying that they incorporated traditional and modern medicine to save Ugandans and neighboring countries.

“During the pandemic, Prof Patrick Ogwang crossmatched an ancient anti-viral plant product that the people in the North Eastern part of Uganda have been using since time immemorial against measles which is caused by the virus Rubeola, with the treatment for COVID-19 which saved many lives,” said the President who walked from his hotel room to the event venue.

Mr. Museveni said Uganda has been able to contain the spread of COVID-19 which ravaged the rest of the world adding that the country is working to develop all types of vaccines needed for humans and livestock. He cited an anti-tick vaccine that has been developed by Ugandans.

President Museveni also called for more collaboration between Uganda and the US especially in pharmaceuticals and vaccines if Uganda is to gain a fair share of pharmaceutical production in the world. He said Uganda and Africa are better placed to produce many of the pharmaceuticals on account of the plants that they have on the continent.

Gen. Museveni further emphasized that the collaboration would go a long way in providing cheaper medicines and vaccines.

“There are two areas where we are moving on our own, but where we would welcome collaboration if available. This is in vaccines and pharmaceuticals. It is not correct to continue with the present arrangement where, in the global share of pharmaceutical production of USD 1.42 trillion, Africa’s share is only USD 16 billion,” he said. H.E the President pointed out eight (8) healthcare and promotion strategies that could help Uganda to eliminate 75 percent of the possible diseases that affect her people.

These include; nutrition through sensitization and Education, hygiene (hand-washing and proper waste disposal), through safe water through boreholes and gravity-flow schemes, vaccination, malaria prevention through use of larvicides and drainage of stagnant water, behavioral change, lifestyle diseases, and protecting the environment. President Museveni met with the President of Boeing Middle East, Turkey, and Africa (META), Mr. KulijitGhata-Aura and his delegation with whom he discussed the aviation industry in Uganda. The President also had an engagement with Mr. Abebe Aemro Selassie, the International Monetary Fund Director for Africa Department. The duo discussed the economy.

Acholi Paramount Chief calls for hope and calm in the region...

Government sets shs 5000 as a cap for escalating fuel prices 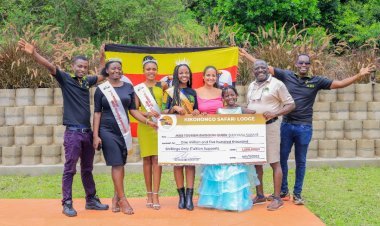