President Yoweri Museveni while attending the #USAfricaLeadersSummit told a group of 40 investors in the United States of America (USA) that they should utilize the better and great investment opportunities in Uganda.

“I am here as an ophthalmologist to help American companies and investors to open their eyes to see better and great opportunities that exist in Uganda and Africa at this time of great change and transformation of African and Ugandan economies,” President Museveni said during a breakfast roundtable meeting with the American investors at Ritz-Carlton Hotel, Washington D.C.

He added, “I feel bad when I see those who speak English like us and are Christians with a lot of influence in Africa, simply lose out to China just because Chinese seem to see more and have better spectacles.”

The participants included several CEOs and leaders of companies such as the USD2 trillion Nuveen/TTIA Hedge fund which is seeking opportunities in low cost housing and agriculture, My-Hydro, who are producers of environmental friendly and fish safe turbines, the YAATRA energy, investors in the Uganda USD4bn oil refinery, the Global energy Alliance (GIAPP) who invest in transmission and purchase of excess power from utility companies for better distribution, Atmos, a California based weather software company, Manchester trading firm owned by Steven Lande who seeks opportunities in DRC and Uganda for mineral and food, several heads of American institutions such as the USTA, the US Development Corporation, the Fair fax Africa fund among others.

Gen. Museveni further revealed that Uganda has greatly transformed and it provides the best investment destination for any investor around the world.

“Uganda has fully recovered what was destroyed in the 1980s and 1970s under poor leadership and has now transformed, providing the best investment destination that I can assure you, profitably guarantees growth for any American and global firm that makes the right decision to come to us. This is because our costs of production, our labour charges, our educated young people and the nearness to the market of AFCTA mean for example, that the Internal rate of return (IRR) in some sectors is the best in the region at more than 17%. This is what the refinery investors for example are getting.”

Organised by Invest Africa US, in collaboration with The Presidential Advisory Committee on Exports and Industrial Development (PACEID), the talks targeted four areas for investment – agriculture and food processing, mining, tourism and infrastructure.

Ms. Rosa Whitaker of the Whitaker Group thanked H.E the President for spearheading the African Growth And Opportunity Act (AGOA) act saying there is no better time than now for US firms to invest in Africa.

“I will tell President Biden to remove taxes on all companies investing in Africa especially energy."

She praised PACEID for their effort in promoting Uganda's trade and export, “...better than the years we have tried to pursue trade and investment with companies and not getting through”.

Mr. Paul Hinks who heads Invest Africa organisationand a key co-organiser of this breakfast event promised to bring the team of investors H.E met to Uganda in March 2023.

“This is exactly the kind of thing Uganda needs to do to bring capital and international partners to Uganda. It demonstrates an openness to global investment in which prospective partners see a willing and cooperative government. I know many members in our network will be looking forward to visiting Uganda in March next year.”

Mr. Odrek Rwabwogo who heads the PACEID effort on Exports, said Uganda was developing a robust environmental, social and governance friendly regime to create trust and credibility for the country as a source of good products and an investment destination.

“We have great commercial incentives such as no tax for ten years for all exporting companies, free access to land, power and water and 100 percent ownership of foreign investment,” he said. The President later conducted an interview with Bloomberg news channel and emphasised the independence of Uganda in decision making.

“We do not accept to be enemies of other countries simply because some countries want it this way. We are not puppets of anyone. We are independent people and we have fought for our human rights for more than 60 years in Africa. Any quarrel we would have with anyone has to be in our own interests not to be made stooges for foreign interest,” Gen Museveni emphasized.

The President was answering the question on whether Uganda would turn down its relationship with China or Russia if the U.S. asks her, given the current stand-off with Ukraine.

The Head of State then left for Chicago in Illinois to open the first ever Uganda-US Trade and Investment Summit.

Sigh of relief as Government launches distribution of Foot... 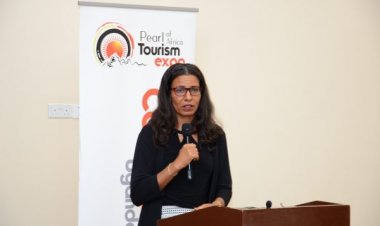