To nominate your favorite among the categories please follow; https://ekkulatourismawards.org/nominate/ The 5th edition of the Ekkula Pearl of Africa Tourism Awards was today, Tuesday launched by the State Minister for Tourism, Wildlife and Antiquities Martin Mugarra Bahinduka at the Uganda Media Centre. “I am pleased to announce therefore; the launch of the Fifth Edition of Ekkula Pearl of Africa Tourism Awards 2022. Ladies and gentlemen, I officially declare nominations for the categories open as per the set criteria and I look forward to seeing more of you participate in the tourism industry as the opportunities are endless and enormous.” said Minister Martin Mugarra Bahinduka. 'The award ceremony whose theme is ‘Rethinking Tourism and Promotion of Green Initiatives.’ will take place on 1st December 2022 at Sheraton Hotel, with special focus on the Sustainable Development Goals – Journey to 2030 on how tourism sector can contribute towards the implementation and achievement of the 17 SDGs; aiming to inspire governments, policymakers and tourism companies to incorporate relevant aspects of the SDGs into policy and financing frameworks as well as business operations and investments' - Bismac Moses the Coordinator Ekkula Tourism awards and the Founder Africa Tourism and Environment Initiatives noted. Amumpaire Moses Bismac speaks during the awards launch at Uganda Media center in Kampala.
The Minister noted that there are a number of unsung heroes who have lifted the country’s flag so high and hence promoted the Pearl of Africa’s beautiful nation to levels of being among the most sought-after tourism destination. These include sportsmen and women who directly or indirectly paint promote Uganda; the music artists using music as a medium of tourism promotion, writers, photographers, and investors, the guides who interface with tourists, and the journalists like you who are here among others. Indeed tourism is everybody’s business. Minister Martin Mugarra poses for a photo with Miss Tourism Rwenzori queen and Uganda Wildlife Edication Centre tourism ambassador during the launch
Therefore the Ekkula awards aim at recognizing and appreciating such stakeholders as a way to motivate them more to be patriotic and promote Uganda in different styles that appeal to different people globally.

Tourism is a weighty field of consumption and a powerful service sector that contributes about ten percent to the world’s GDP. Sustainable consumption and production patterns are central to sustainable tourism. It is one of the world’s fastest growing industries and an important source of foreign exchange and employment, while being closely linked to the social, economic, and environmental well-being of many countries, especially developing countries. The State Minister for Tourism, Wildlife and Antiquities, Martin Mugarra admires the award .
“The Ministry of Tourism, Wildlife and Antiquities therefore strongly supports private sector initiatives that intend to promote tourism. Such initiatives will increase the quality of service and encourage healthy competition in the industry. It’s from this background that we welcome Africa Tourism and Environment Initiatives quality assurance project ,Ekkula Pearl of Africa Tourism Awards that recognizes the best performing stakeholders of the tourism industry.”- the minister added Part of the coordination team of Ekkula Tourism Awards during the launch.

The coordinators of this initiative have shared the set categories and criteria of the Ekkula awarding process as stipulated below. Excited organizers of the awards ceremony
Unlike the previous awarding ceremonies, this years’ Ekkula Tourism awards will involve regional quality assurance and sustainability training workshops, intended to improve service delivery by impacting basic tourism skills across the value chain. The first regional expo will take place on the 14th of October 2022 in Mbale, moving to Gulu on the 21st of October 2022, and then on the 28th 0f October in Fort portal the tourism city and wrapping the regional workshops in Kampala on the 04th of November.

Top participants from each region will then be invited in an in-depth national tourism training hub.

Currently, the awards are running on their 5th edition after a spell of two years due to COVID-19 restrictions.

Even though the country is yet facing another trial, of the Ebola Outbreak, Martin Mugarra said they are rather delighted to inform the public that the ministry of health through the permanent secretary Dr. Diana Atwiine recently announced that the Government of Uganda and partners have put measures to control the disease.
These are the proposed Categories.
Tourism Media Personality 2022
Travel Photographer Of 2022
Tourism Supportive Media House.
Cultural Tourism Award 2022
Pearl Of Africa Event Of The Year.
Airline Of The Year.
Exceptional Restaurant 2022.
Best Eco Safari Lodge.
Exceptional New Hotel Of The Year.
Best Luxury And Business Hotel.
Young Tourism Personality.
User Friendly Transport Of The Year.
Adventure Destination Of The Year.
Outstanding Tour Guide
Sustainable Tour Operator.
Innovative Tourism Award 2022
Accessible And Inclusive Tourism Award.
Outstanding Tourism Entrepreneur.
Tourism Honorary Award.
Lifetime Tourism Achiever.

To nominate your favorite among the categories please follow;
https://ekkulatourismawards.org/nominate/

More so, The Ekkula inclusive tourism training and quality assurance boot camps have also been launched  starting with Eastern Region scheduled for; the 14th -15th of October, Northern 21st -22nd of October, Western 28th -29th, and Central Uganda 4th -5th of November. The thematic areas to deliver include; Compliance with Stipulated regulations by Uganda Tourism Board, Branding, Digital Marketing, Quality Assurance knowledge, and Sustainable Tourism practices for small and medium enterprises. This is in line with this year’s theme ‘Rethinking Tourism and Promotion of Green Initiatives.’’ The initiative is organised by Africa Tourism and Environement Initiatives. (ATEI) Ngabo Saad, Mr Ability Central region talks about the sustainable inclusive tourism workshops during the launch of Ekkula Tourism Awards. He is excited about the awards ceremony

‘As long as the commodity is made in East Africa, it should be allowed to access...

No Ebola case in Kampala even when an Ebola patient passed on at Kiruddu Hospital,... 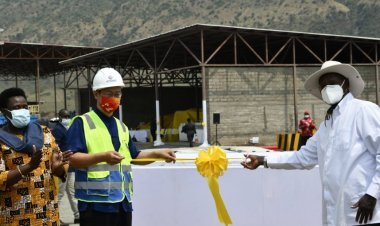